For many years, Buxton has coached U.S. men’s freestyle international tour teams which have competed in a number of different nations. He has been a personal coach and coaching staff member for many U.S. World Teams also attending and coaching at numerous U.S. National Team training camps in the last decade.

During his tenure, Blair won 30 National Prep team titles and finished as the No. 1 ranked team in the nation 10 times.

Buxton was an NCAA qualifier for the University of Rhode Island and a New England Conference champion. He was the Outstanding Wrestler at the 1980 Northeastern Regional Trials for the U.S. Olympic team. He was an undefeated high school wrestler for Providence Country Day School in Rhode Island.

Buxton received USA Wrestling’s Lifetime Achievement Award in 2006. Buxton is a member of the Rhode Island Hall of Fame and was selected in 2009 as the first-ever NWCA “National Prep Coach of the Year,” an award he won three times.

A native of Springfield, NJ, Cooperman prepped at Blair Academy where he became just the third wrestler in history to win four National Prep titles. As a senior, he was ranked #1 in the country in his weight class. He also won two Beast of the East titles and three Ironman championships.

After spending a red-shirt year at the University of Minnesota, Cooperman transferred to Lehigh University. During his first season (2002-03) of wrestling for Coach Greg Strobel he went 15-2 in dual meets and won his first EIWA championship. As a sophomore, Cooperman finished as the runner-up at the EIWA championships and in 7th place at 141 pounds at the NCAAs. During both his junior and senior year, Cooperman won the 141-pound title at the EIWA tournament and the 3rd place trophy at the NCAAs.

He graduated from Lehigh in 2006 with a degree in Psychology and an overall college career wrestling record of 99-12.

After graduation, Cooperman turned to coaching wrestling as his career choice. He spent three years as an Assistant Coach at Cornell University – the EIWA championship team all three seasons. He was also a member of the coaching staff at Rutgers University and the University of Illinois prior to assuming the head coach position at the New York Regional Training Center, where he led the team to the US Open title.

Cooperman is now a Coach here at Buxton Athletic Training Center, while working at Interstate Waste Services as an Account Manager. He currently resides in Pompton Lakes, NJ with his wife LeAnne and his two young sons, Caden and Cameron.

Coach Joe Rivera brings a wealth of knowledge from his 25 years of wrestling coaching experience coupled with his black belt in Jiu Jitsu. Coach Joe is a former state qualifier for Saint Joseph’s HS of Montvale and has been building strong fundamental foundations for BATC novice wrestlers for many years. 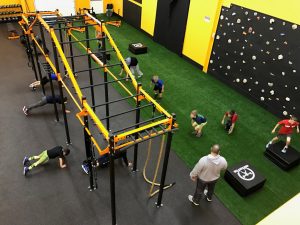